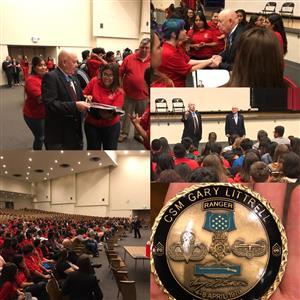 On Friday, October 6th all students in our Law and Public Service Pathway had the unique opportunity to participate in a program presented by the Medal of Honor Foundation. Two Medal of Honor recipients delivered a presentation to our students focusing on citizenship, historical context of the particular war and military branch in which they served, and serving community.

Pasadena High School was very proud to welcome Gary Littrell and Hershel Williams to our campus. We very much appreciate these Medal of Honor recipients sharing their experiences with our Law and Public Service Pathway students.  Thank you for your service!

Additional information on our Law and Public Service Pathway can be found here.

The following information can be found on the Medal of Honor Foundation website about our two presenters.

Citation: For conspicuous gallantry and intrepidity at the risk of his life above and beyond the call of duty as demolition sergeant serving with the 21st Marines, 3d Marine Division, in action against enemy Japanese forces on Iwo Jima, Volcano Islands, 23 February 1945. Quick to volunteer his services when our tanks were maneuvering vainly to open a lane for the infantry through the network of reinforced concrete pillboxes, buried mines, and black volcanic sands, Cpl. Williams daringly went forward alone to attempt the reduction of devastating machine-gun fire from the unyielding positions. Covered only by four riflemen, he fought desperately for four hours under terrific enemy small-arms fire and repeatedly returned to his own lines to prepare demolition charges and obtain serviced flamethrowers, struggling back, frequently to the rear of hostile emplacements, to wipe out one position after another. On one occasion, he daringly mounted a pillbox to insert the nozzle of his flamethrower through the air vent, killing the occupants, and silencing the gun; on another he grimly charged enemy riflemen who attempted to stop him with bayonets and destroyed them with a burst of flame from his weapon. His unyielding determination and extraordinary heroism in the face of ruthless enemy resistance were directly instrumental in neutralizing one of the most fanatically defended Japanese strongpoints encountered by his regiment and aided vitally in enabling his company to reach its objective. Cpl. Williams' aggressive fighting spirit and valiant devotion to duty throughout this fiercely contested action sustain and enhance the highest traditions of the U.S. Naval Service.

If you'd like to hear about his experiences a living history video is available on the Medal of Honor Foundation website.

Citation: For conspicuous gallantry and intrepidity in action at the risk of his life above and beyond the call of duty. Sfc. Littrell, U.S. Military Assistance Command, Vietnam, Advisory Team 21, distinguished himself while serving as a Light Weapons Infantry adviser with the 23d Battalion, 2d Ranger Group, Republic of Vietnam Army, near Dak Seang. After establishing a defensive perimeter on a hill on 4 April, the battalion was subjected to an intense enemy mortar attack which killed the Vietnamese commander, one adviser, and seriously wounded all the advisers except Sfc. Littrell. During the ensuing four days, Sfc. Littrell exhibited near superhuman endurance as he singlehandedly bolstered the besieged battalion. Repeatedly abandoning positions of relative safety, he directed artillery and air support by day and marked the unit's location by night, despite the heavy, concentrated enemy fire. His dauntless will instilled in the men of the 23d Battalion a deep desire to resist. Assault after assault was repulsed as the battalion responded to the extraordinary leadership and personal example exhibited by Sfc. Littrell as he continuously moved to those points most seriously threatened by the enemy, redistributed ammunition, strengthened faltering defenses, cared for the wounded, and shouted encouragement to the Vietnamese in their own language. When the beleaguered battalion was finally ordered to withdraw, numerous ambushes were encountered. Sfc. Littrell repeatedly prevented widespread disorder by directing air strikes to within 50 meters of their position. Through his indomitable courage and complete disregard for his safety, he averted excessive loss of life and injury to the members of the battalion. The sustained extraordinary courage and selflessness displayed by Sfc. Littrell over an extended period of time were in keeping with the highest traditions of the military service and reflect great credit on him and the U.S. Army.

If you'd like to hear about his experiences a living history video is available on the Medal of Honor Foundation website.