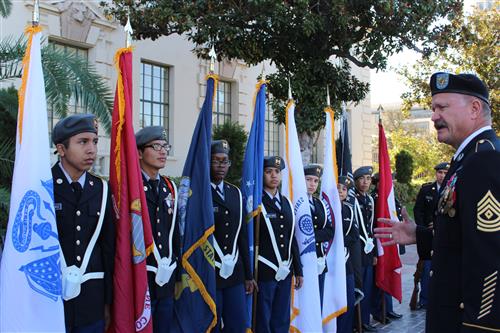 In his 22 years at Blair, 1SG Ervin Turner has tirelessly advocated for Blair and our Army JROTC program. No surprise, then, that we are the only JROTC program left in PUSD and yet continue to thrive. 1SG recently wrote a guest column for the online news source, Pasadena Now. Please read the article to learn more about our program, and thank you, 1SG!

His column is also copied below:

My entire Military career (24 years) has taught me give a cadet purpose and direction, and they will follow you anywhere. This is what elevates programs as this to a level many can only wish they would have been part of.

The program was established in 1984, along with Pasadena High School, Navy JROTC, and eventually Muir Air Force JROTC.
Unfortunately, the other two programs have folded for various reasons, but to date Blair’s Army Program is running as strong as ever.

It has faced many obstacles, the prospect of school closures, and particularly in 2006, when the State took away Physical Education Credit from the JROTC’s in California. The PUSD Board of Education gave all three schools an ultimatum: Acquire a physical education state credential, or lose the ability to give PE credit for the course.

I was the only instructor of six who took that challenge up and graduated UC Bakersfield with a single subject PE credential.
The JROTC Cadet Challenge far surpasses the State mandated Fitness program, by over 75 percent, and these cadets are eager for that challenge.

The advantage it gives the students who choose the program, is the ability to take the class at a higher level physical education, while being able to learn discipline, leadership, loyalty, honor, and ethical behavior.

Cadets experience a whole new level of responsibility in their positions, and responsibilities. They graduate out of the program, already knowing how to lead, train and win in any circumstance. We take them to a higher degree in each and every task we teach them. One cadet is in charge of the entire group of cadets (Battalion Commander). This take determination and fine leadership skills.

The Army has spent millions of dollars on the curriculum that we teach in our classroom every day, the cadets experience all levels of Military History, Map reading along with Land Navigation, Physical Fitness, Drill & Ceremony, Marksmanship (Pellet Rifles), Service Learning in the community, Volunteerism, for many community offices, and organizations.
During Veterans Day they participate in the Veterans Day event in front of City hall in Pasadena, experiencing Honor, Loyalty, and Esprit De Corp of the Armed Services.

The cadets continuously provide the American Legion Post 13 with Volunteerism, and community service by participating tasks asked for by the Legion.

In my 22 years at Blair, I have had over 3,500 cadets pass through my ranks, of being a cadet in the Blair Army JROTC program. We have had several Military Academy graduates, one of our finest cadets graduated from West Point. Many receive full ride scholarships to UCLA, and USC.

But it is what they walk away with in the end, and that is the pride that they took the challenge to better themselves and learn more than just the basic High School Diploma, many choose to participate in Blair’s International Baccalaureate graduation path, as well as maintaining a leadership role in the JROTC.

Drill and Ceremony, a fine way to teach and develop discipline, and all of our cadets strive to achieve this, and when you see them in the local parades it shows. Our cadets want discipline, they want to have a purpose and direction, and this is what makes them proud to call themselves a Blair Army JROTC Cadet.

I pride myself in being involved with this program for over 22 years, and when I pass the torch, upon retirement, I know everything I have taught these cadets they will always remember. I know this because of my return visits of my past cadets whom come back and share their stories with me.

Being an Army Instructor, senior to junior, is an individual challenge I am glad I took, you not only teach but you learn along with the cadets. Pride, Bearing, Duty, Honor, and Country, just a few things to experience. Instructors are the best asset the community can call upon, in the time of need.

Ervin Turner, U.S. Army First Sergeant, retired, joining the Army five days after turning 18. During his career he saw duty guarding infamous Nazi Rudolph Hess in Spandau Prison in Berlin, Germany; was deployed to Bosnia during a NATO Mission in 1996; and graduated in the top 5% of the First Sergeants Academy at Ft. Bliss, Texas. Turner retired in 1999 and launched his second career: becoming an educator through the Army JROTC at Blair High School as the JROTC Army Instructor.