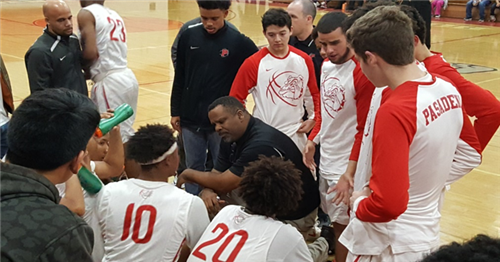 Over the last 25 years Coach Brooks has been a part of the PHS Basketball dynasty; he has coached the CIF SS Championships of 1995, 2007 and 2012. When Tony was an Associate Head Coach, with then Head Coach Tim Tucker, his primary responsibilities were game planning and offensive planning. Tony credits his love for the game to beloved Coach Bill Duwe who coached PHS for 17 years. Coach Brooks is only the fifth Boys Varsity Basketball Coach in school history.

Tony attended the Cal State University of Bakersfield with a four year scholarship and graduated with a BS Degree in Investment Finance. He studied technology at Point Loma University and eventually earned his Master’s in Ed. Tony grew to be 6'4" and played as point guard for the Road Runners. At PHS he averaged 18 points per game, 9 Rebounds 5 Asst.; in college he averaged 12 points per game and he played the two guard. After CSU, Tony played basketball in Hong Kong, Singapore, and China; he toured the Far East through the Friendship Competition Program.

Tony believes his mission in life is to mentor young men as they navigate life.  “Be a good son," he advises. "Become a strong academic student leader, develop your craft and fundamentals.”