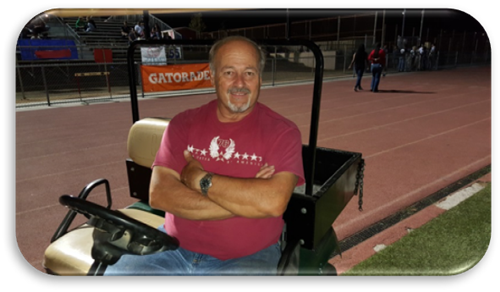 Phil Calafat the Athletic Director of Marshall Fundamental was born in Greece; he has spent his last 49 years attending, graduating, and working for the Pasadena Unified School District. Phil attended Webster Elementary, Marshall Junior High, and graduated from Pasadena High School in 1974.

While attending PHS, "Once a Bulldog...always a Bulldog," Phil wore the Bulldog #53 football jersey and was the offensive tackle and kicker. His best kick sailed 40 yards through the football uprights! The highlight of his high school memory was in 1974 when PHS beat Bishop Amat Memorial High School an St. Francis High School. He also proudly stated, "PHS never lost to Muir High School in my four years!" His football career took him to PCC where he played offensive tackle and their kicker for two years.

Phil has been the Athletic Director at Marshall Fundamental for the last five years. Phil earned his Bachelor of Science in History and Political Science and his Master's degree in Educational Management. He served as Assistant Principal at PHS from 1994 to 2008. He is also a proud member of the Tournament of Roses Association, serving since 1983.

Phil feels his challenge as an AD is to balance and focus on the daily multi-tasking of his job demands. Phil is driven by his love for athletic competiveness and the concept of team. He believes the discipline learned on team will transfer to real life situations. "Athletics can be the hook to keep kids interested in school." Phil says what he seeks in hiring coaches are three key beliefs: love of sports, intergrity, and knowledge of the sport. He recalls the most recent best athelete from Marshall is tennis player Tegwyn John, who graduated from UC Davis in 2016.