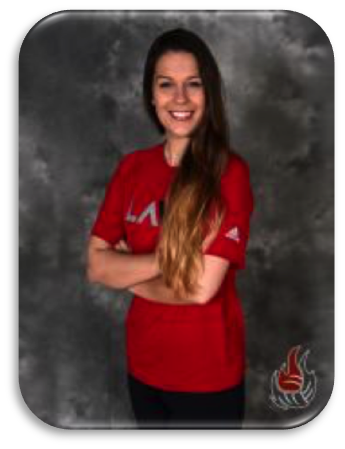 Ashlee DiSalvo was recently named as the 2016-2017 Pacific League Varsity Volleyball Coach of the Year. She has coached at Pasadena High School for the past four years as their Varsity Head Coach. She was born and raised in New York and attended the Felician University, where she played volleyball as a defense specialist known as  “Libero”. The position was added to the game of indoor volleyball in 1999 along with a set of special rules to make the game more exciting. The "Libero" remains in the game at all times and is the only player that is not limited by the regular rules of rotation. The libero usually replaces the middle blocker position when they rotate to the back row, but never rotates to the front row.

Ms. Ashlee DiSalvo received a full scholarship to play for the Felician College in the Central Atlantic Collegiate Conference. Coach DiSalvo was instrumental in adding Frosh/Soph Volleyball at PHS to feed into her JV/Varsity Programs. Additionally, she serves as Club Director and Head Coach of the volleyball club by the name of LAVA Pasadena. Ms. DiSalvo states, "I coach because I love my kids and the families at PHS. I want to share my experience with my players and serve as a positive female role model for all female athletes. My best memory from coaching at PHS was taking Burroughs 5 sets in 2014 where we were 5 points away from making CIF. My best memory from this year was beating Burbank at Burbank for the first time in my coaching history."