​Pasadena High School alumni and current Assistant Athletic Director and former aquatics coach Jennie Jacobson-Huse is a pioneer in the sport of water polo. When she was a student 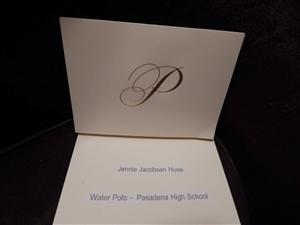 In addition to Coach "J" the other inductees are:

Every person in Pasadena knows somebody or knows somebody who knows somebody from here who has merited significant athletic achievement. People who have, even inadvertently, in large ways and small, contributed to the history of American sports. There are literally thousands who need to be considered i.e. players, coaches, jockeys, horses and sponsors. PASHOF also pays tribute to the countless residents, business owners, community leaders and educators who know it truly does take a village to raise a child... or a Super Bowl Champion or an Olympian, or two. Sports at every level of competition are a great part of Pasadena's history. A proud athletic legacy is not the only thing we have to recommend ourselves as a proud city, but is one of the finer things. PASHOF is not just about being a museum (although that's not an unreasonable or unforeseeable goal), rather, PASHOF honors it's legends via its Legend Award for the benefit of the youth of Pasadena. The Award, named in honor of individuals from Pasadena who have made significant strides in sports, and to supporters and organizers of youth oriented sports  programs in the City of Pasadena, provides 4 grants totaling $1,000.00 in honor of the Award recipients(s).

Since its inception, PASHOF has awarded over $5,000.00 in the form of scholarships and financial/equipment grants to high schools in the Pasadena Unified School District and organizations located in the City of Pasadena.

PASHOF has a volunteer research team that maintains statistics and lists of individuals eligible for induction. The list is updated in the Spring and the votes are tallied in April - May. The winners are notified and announced to the press. We do not pretend to know everyone who will ultimately be made eligible for honors. PASHOF needs your help and support to identify these people. They need to be considered, and we want to know their stories. Any Pasadena, California resident can nominate a Hall of Fame hopeful. To be considered, nominees must have gained significant recognition, locally or nationally, in athletic competition, or be an individual, business or organization who have demonstrated a significant history of support to youth oriented activities and sports in the City of Pasadena.

More information on the Pasadena Sports Hall of Fame can be found here.